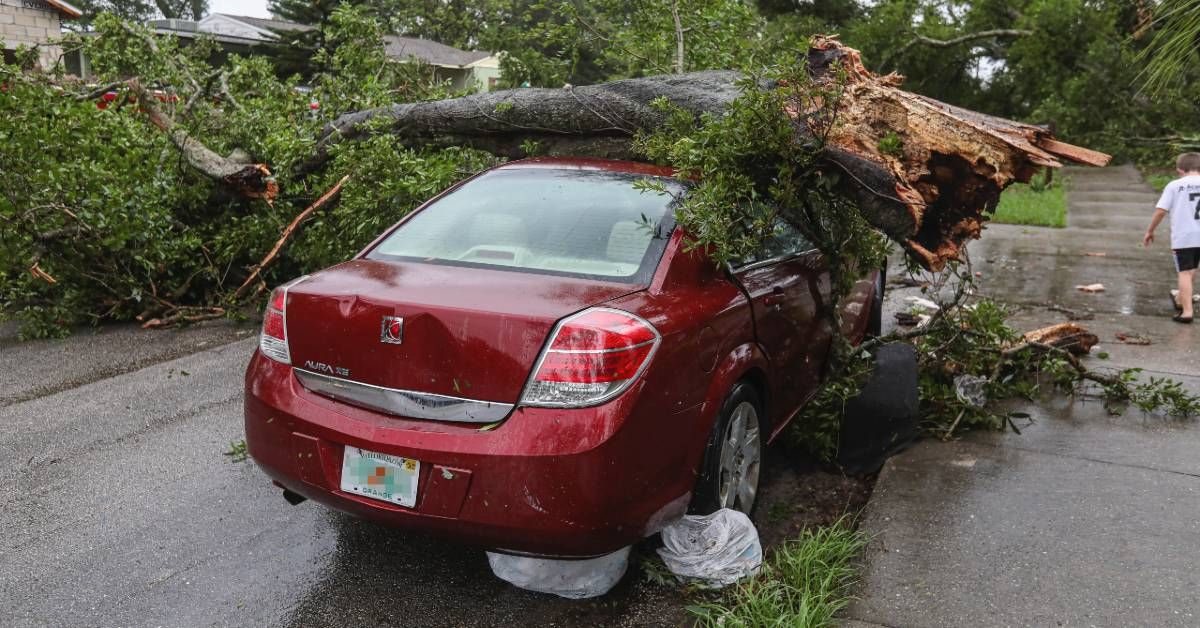 Dealing with storm damage is simply a part of living in the great state of Florida. In the aftermath of a severe wind storm or hurricane, it’s important for homeowners in Florida to assess the damage that may have occurred, and decide what further actions need to be taken to keep everyone safe and keep properties from being damaged further. Big Branch Tree Service in Jacksonville offers emergency tree services 24 hours a day, seven days a week, including assessing and servicing trees that have been damaged by the latest intense storm.

While damage to some of your trees may seem severe, it’s possible that some of your trees can be treated and saved. In trees where this is not the case, and the damage is beyond repair, Big Branch Tree Service can safely and quickly remove critically damaged trees to remove their safety risk. But how do you know when your tree is beyond repair or can be saved? Here are some instances of the types of damage that can occur, and what to expect when it comes to whether or not your trees can be saved or need to be removed. 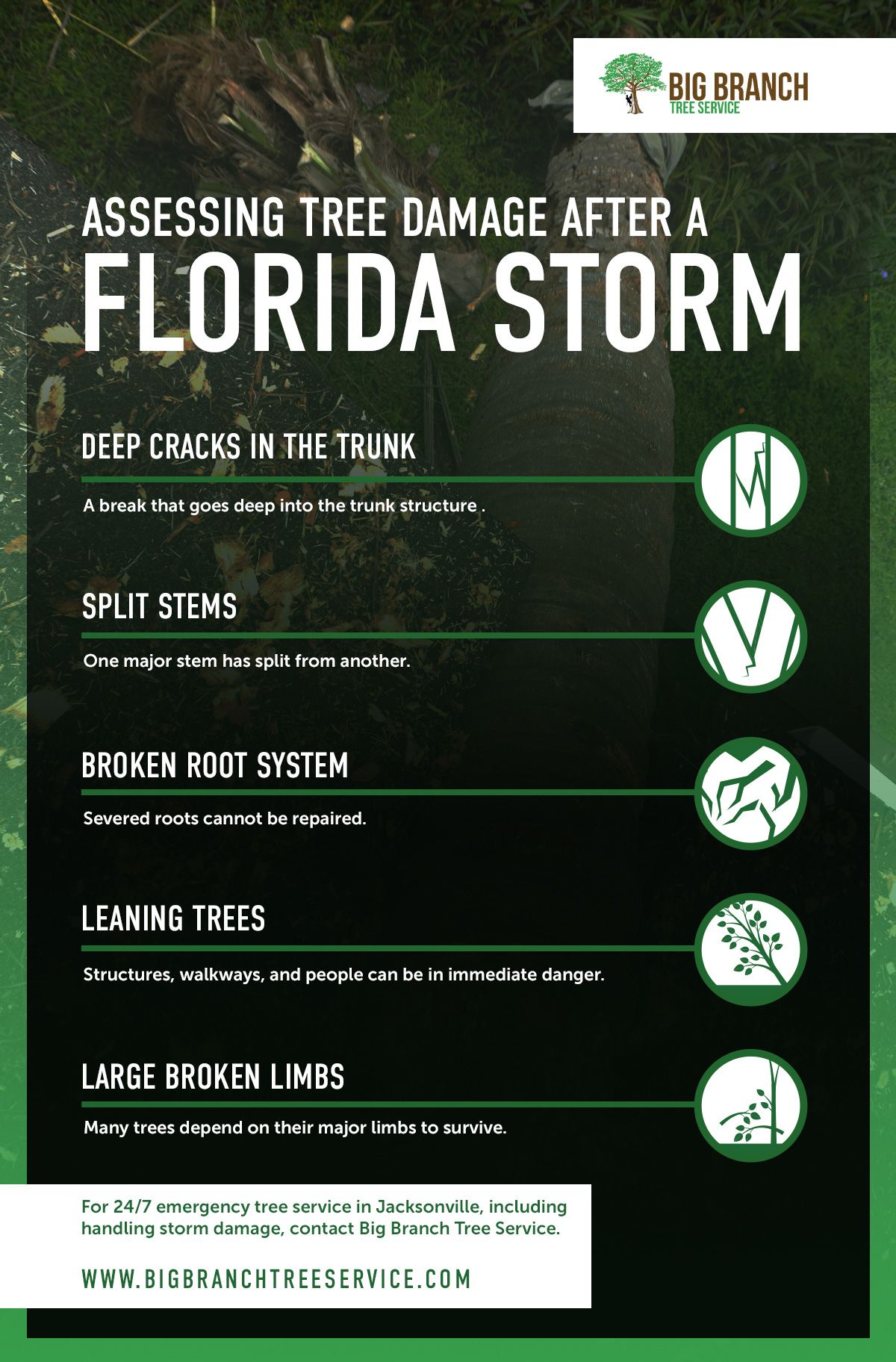 When to Remove Your Storm-Damaged Tree

If you see any of the following types of damage or warning signs in your trees, it is very likely the tree will need to be removed, as they pose a serious safety risk to people and property.

Cracks or Breaks in the Lower Trunk

Oftentimes, when a large limb of a tree breaks, it can create a crack that extends deep into the trunk. Deep cracks low down on the trunk of a tree are almost impossible to close, and it’s very likely that the rest of the tree will ultimately fail regardless of any attempts to save it.

Some tree structures include a splitting stem that is in a type of V-shape. When one of these branching arms of a V-shaped tree splits, it’s likely that the tree cannot be rescued. This split structure is unfortunately very susceptible to breaking when exposed to severe weather, as the point where the two stems converge is typically relatively weak.

When large, mature trees show signs of a broken root system, it’s basically game over for that tree. Trees that have reached a certain size and age rely on large root systems for support, and when that support system is severed, there isn’t much that can be done to help that tree. At this point, they’re unstable and unsafe. It’s possible that younger trees can be saved from this scenario, but we’ll address that later.

A tree that is beginning to lean due to storm damage is a telltale sign on its own, but when that tree is leaning towards a structure, roadway, powerlines, or another high-traffic area, it is an immediate safety hazard that needs to be addressed. When trees are leaning, it’s practically guaranteed that it has suffered severe root damage. To avoid the leaning tree from falling and damaging a structure or injuring a person, it should be removed immediately by a professional tree service team.

Some trees simply are dealt a bad hand and are inherently structurally susceptible to damage. It is quite common to see trees that have characteristics like multiple trunks, codominant stems, and weak unions between branches (called “bark inclusions”), to be prone to taking damage easily during storms. Even if storm damage to these types of trees seems minimal at first glance, a professional tree service can assess the tree’s potential for failure and make recommendations regarding possible removal to avoid damage.

If it appears that most of the major limbs of a tree have been damaged or felled, that is usually an indication of a type of tree injury that is impossible to recover from. When most of a large tree’s canopy is destroyed, it’s very unlikely that the tree will survive, and should be removed.

When to Restore Your Storm-Damaged Tree

It’s not impossible that your storm-damaged tree could be salvaged. However, this usually can only occur if the major limbs, trunk, and roots of the tree remain intact. Here are some instances where trees damaged by hurricane winds could possibly be rescued.

A “defoliated canopy” is a fancy way of saying a storm knocked all of the leaves off of your tree. Thankfully, a tree that simply loses its leaves in a storm is not dead, and the tree will produce new leaves in the spring. It’s also worth noting that saltwater from some of these storms can cause trees to drop their leaves. This can be remedied by improved irrigation of freshwater.

Some trees are particularly resilient and can actually recover from the damage that would destroy other species. Oak trees, for example, can recover from even major limb damage, especially if it is a younger tree. This is also true for some species that lose a large portion of their canopy. Even with as much as 75% of their small limbs being broken or compromised, they can recover.

Many small, young trees haven’t had the chance to develop a strong root system and can begin leaning after a storm. If a tree was recently planted or has a diameter of less than four inches, it’s possible to simply stand the tree back up and replant it. Tree service professionals can assess your smaller damaged trees and determine if they can simply be replanted.

If your tree only appears to have taken damage to its smaller branches, all that tree may need to recover is professional pruning. Most of the time, a tree can fully recover from this type of minor branch damage.

When your trees suffer storm damage in the Jacksonville area, contact the friendly professionals at Big Branch Tree Service. We’re more than happy to visit your property and determine the extent of storm damage to your trees and develop a plan to remove any trees that are damaged beyond repair. We have all the trained professionals and equipment necessary to get the job done quickly and safely, so please don’t hesitate to call after the next Florida storm comes blowing through.